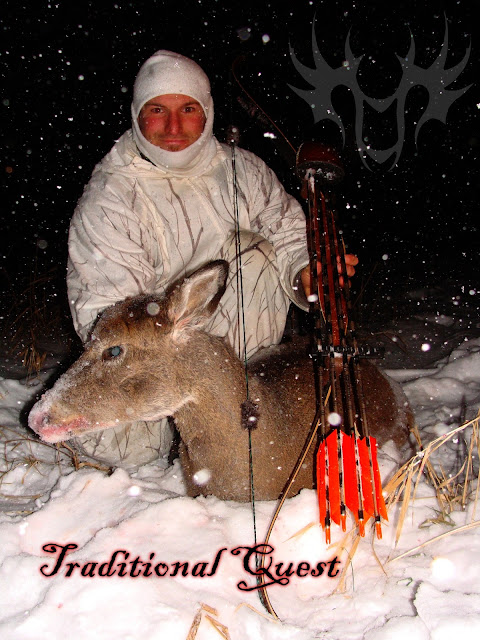 ﻿Research, practice, and practice some more. You hunt and hunt more. Then, everything comes full circle.
Today was a day I will not soon forget. My day started by checking the weather well before daylight. Several times. My mind was made up to go get on stand. Like I had said in my last post, the wind was marjinal for the stand I had chose to sit. I figure on a shot being presented before I would get caught. All settled in and my mind was wondering about what the next couple days would bring. I seen 2 deer in my morning sit. A small 5 point and a yearling doe. Both passed down the same trail only minutes apart 17 yards down wind of me. They never knew I was lurking in the trees. My standards are set and I passed.
After the morning unfolded it was time to check my cameras. I had moved them into different locations and couldn't wait to see what they had seen. Nothing. On both properties I had these cameras and not a single picture. I was more than bummed. How could that be? Well, I learned where not to sit. I'm not going to let it change the game plan.
The big snow storm hadn't began to unleash just yet so I made a quick rooster run with Dixie. The fence line on our farm held several rooster, but in this location getting a shot isn't too common. As was the case this time also. The little bit of soft snow that was left exposed large amounts of pheasant tracks. Should be good. Nope. The ice on the slough was surprisingly thick, which means hunt the cattails. I noticed the coyote tracks were extra thick. Sure enough, we pushed him right out of his brown grassy bedroom. He was a dandy. The first good midnight sun and he will be mine. A very cool encounter. I headed home.
With the snow now coming down in full force, I headed out to practice some shooting before my sit. I have to admit, it was really good practice in that snow. Real conditions for real practice. Time to clean up and light out. Several inches had fallen already and there was no sign of letting up. In the tree and ready for action. As evening set in I was worried about not seeing any activity yet. Then, to my left, I caught movement. The deer had appeared as if they came up from the ground. Silent and graceful. They were grouped up pounding down acorns about 50 yards away. Holding my bow with fingers made of ice. I did try to warm them by taking turns holding them under my ultra thin orange vest. Didn't work so hot.
Finally, they began working towards me. I had my eye on one that was rather larger than the rest. I want her. Fortunately, she was the first one to come down the trial. She stopped just under 20 yards broadside. I wish she had been a touch closer, but it's now or never. I drew and released a meat missile. Jackpot! The arrow crashed into her and off she went. For about ten yards she was pushing with her hind legs only. Her front shoulder were pinned by the arrow, making me feel even better about shot placement. The arrow was sticking out of her dinging off every tree she passed. Out of sight she went and the other deer slowly scampered off. I was shaking like I just whacked a booner! I LOVE THIS STUFF! Slithering out of the tree and picking up on her trail. She only went about 80 yards. With no exit she didn't leave a drop of blood. I followed only tracks.
As I walked up on her I knew I had done it. She was Mrs. Hog. A big ol' girl. My shot was great. One arrow, 2 lungs. The arrow was bent like I had never seen. The broadhead hit the opposite low shoulder and made a mess out of that front quarter. That's the nice thing about when a deer carries the arrow. It makes a mess, but it puts them down.
I can honestly say that this is truly one of, if not the most, amazing whitetail harvest I've had. I made a goal, practiced, and succeeded. Raw archery. My flame is burning hot now. I still have several weeks of the season left and the Traditional Quest is far from over. Party sits, party sent nudges, and I still have a tag left. Let the games continue. Thank you all for being a part of what I love and letting me share this with you. It's been a great day and also a long one. From sitting, walking, to yes, even shoveling. I'll be back at it tomorrow! Stay tuned and I'll keep you updated on....The Quest!
The Quest continues...
Posted by Unknown at 10:56 PM 1 comment: Links to this post

Well, it's Thursday evening and I'm all geared up for my weekend to start tomorrow morning. This is going to be an interesting one, I believe. We are scheduled for a pretty big snow storm starting mid day Friday. No worries, I'm gonna ride it out and hunt. I'm mainly concerned about the wind direction for the morning. Winds with any East in them are not too great for me. We'll see, I might have to sit out in the morning. Now, evenings are the prime time for me. I can't wait to check my cameras. I moved them last weekend and I'm really curious to see what we've got! No matter how this all pans out, it will surely be interesting! I'll keep you posted and share trail cams pics if I get some good ones.

﻿
No gadgets, no crazy technology, no nothing. Just me and a bow. The way archery was.
A handful of years ago I became interested in traditional archery. I purchased a Martin recurve and began testing myself. I couldn't believe the world I had entered. When you start removing cams, wheels, sights, let off, and so on, you're left with nothing. Except for a bare bow. I had no idea what was in store for me. I shot and shot. Then I hunted and hunted. My success hunting with traditional gear was minimal. I have harvested a few deer with my recure, two of which were with cedar shafts. The deer I harvested were yearlings, none the less, trophies.
Last season I never even brought the recurve on stand. Mainly because of my lack of confidence in my shooting ability. My groups were very inconsistent. Feeling like I gave up on something I loved, I have began shooting again. Researching shooting methods and learning them has boosted my shooting confidence. Gap shooting is the method I have been memorizing. I wouldn't say I'm going to be winning any tournaments, but I have never shot this good with a bare bow. Ever.
The time is now. The weather, as we all know, is getting nasty. The deer are transitioning back into feeding patterns and herding up. I have began to sit with my recurve beside me. A fear that haunted me was the fact that if Mr. Large and in Charge came along I would be devastated not to have my compound. Let him come. I would love to take a hog with traditional. If he passes out of range, do to my even shorter shooting range, then that's life. If you don't do it, you won't do it. One of my biggest goals in life is to take a bear with my recurve. I've been too afraid to blow an opportunity to use the recurve. I just need to let it happen. This will be another story come next September. 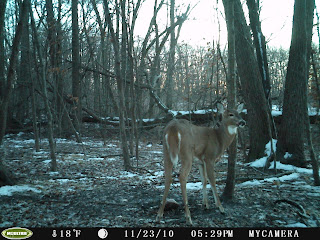 This past weekend, my recurve and I, had some encounters. A doe fed her way to me at sunset. The wind was suppose to switch from SW to SE. It did. At the worst possible time, like always. She was 40 yards and then her nostrils filled with human funk. She stood like a statue for all of 10 minutes until she turned and gracefully headed away. All the while, a spike buck was on my right side at 25 yards. He didn't like her body language and began to leave slowly as well. I passed him. I have never shot a buck of any caliber with my recurve. A would like something a bit better than a 4 inch spike. I would honestly be happy with a 1 1/2 year old 6 or 8 point. I say let'em go and let'em grow if you won't truly be 100% happy with your harvest. I truly would be happy with a good 1 1/2 year old at this point in my traditional quest.
The next evening a small fork buck passed 8 yards broadside. This was so so hard to pass. The shot he offered was as perfect as I could have asked for. I will not reset my standards in which I have set. A buck I would be happy taking with the recurve or my tags will be filled with antlerless deer. Even at that, I would really like to shoot a tank of a doe also. I still have tags and plan to hunt as hard as ever.
The weather is suppose to smooth out and warm a tad by the weekend. Deer movement should be good and I'm excited to check my cameras and prepare for the week. My traditional quest continues. I will keep you posted on my camera results, encounters, or lack there of, and if the moment happens. You will know how it all pans out. To all my readers, shoot straight and give'em the shaft!
To be continued... 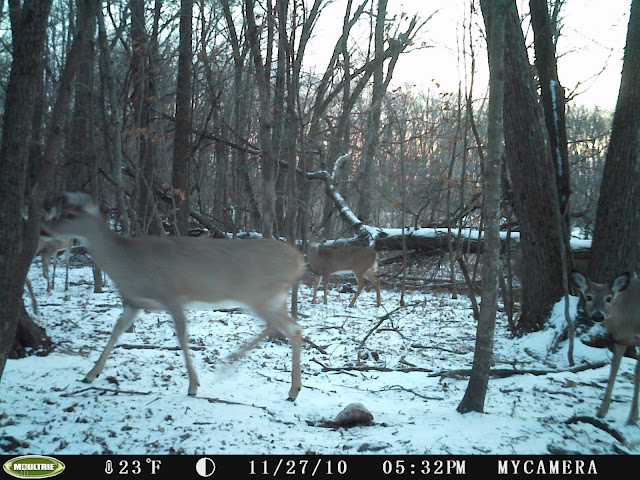 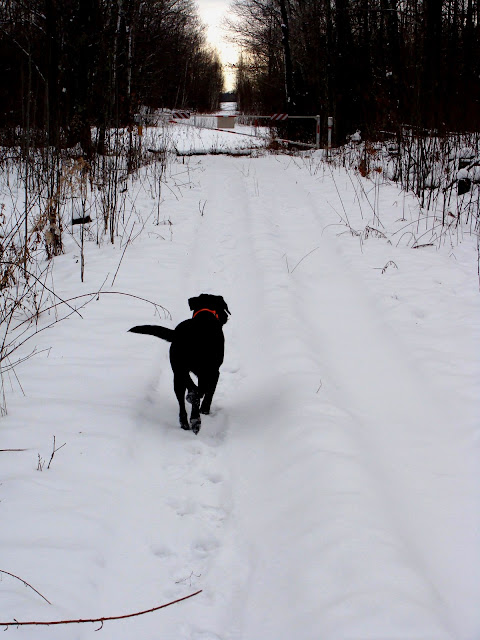 ﻿
Thanksgiving is over and I'm feeling a tad bit large.   Not to worry.   I usually take a trip north to do a little grouse hunting which means a lot of walking.   A fresh coat of snow and cool temps had me thinkin' it was going to be a good trip.
As far as flush numbers goes, it didn't turn out to be so hot.   We only flushed a group of three birds.   They held until we passed them.   Watching Dixie I asked myself, "Did I just hear that?"   Yep.   Looking around to see where the flush came from I heard another.   Running frantically to get a shoot, but I was too late.   One glimpse of the last flush was all I got.
Regardless of the birds, it sure was beautiful up there.   I was in the Hinckley area soakin' it all in.   There's something majestic about being in the middle of no where.   When you stop, the only thing you hear is the breeze tickling the tree tops.   If not for the cool temps you could curl up into a ball and sleep for days.   It is so relaxing.
The squirrels and song birds where doing their best to stay one step ahead of old man winter.   Not sure that anyone really ever succeeds in doing so.   Now days it seems like spring and fall no longer exist.   Summer into winter and winter into summer.   We seen some amazing country and lots of classic rub lines to watch.   We even shared lunch together, Dixie and I.   Grouse or not, the walk was well worth it. 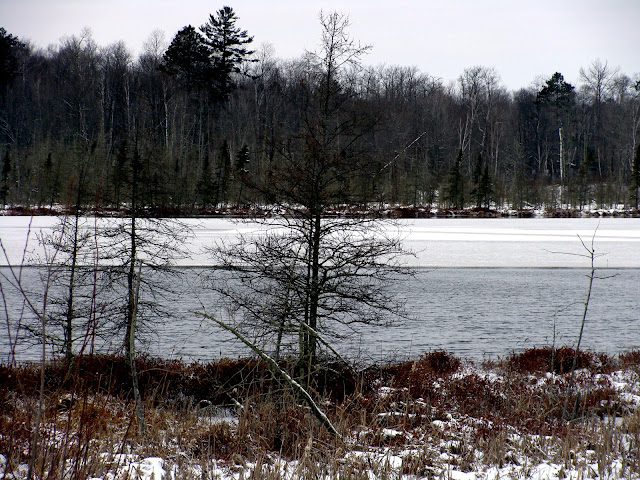 Posted by Unknown at 5:43 PM 2 comments: Links to this post